The timber-Concrete Composite system effects solid bonding the bonding of timber supporting beams to a concrete slab by means of screw-like connectors which produces a hybrid supporting system that offers special structural physical benefits, such as increased load bearing capacity and stiffness. 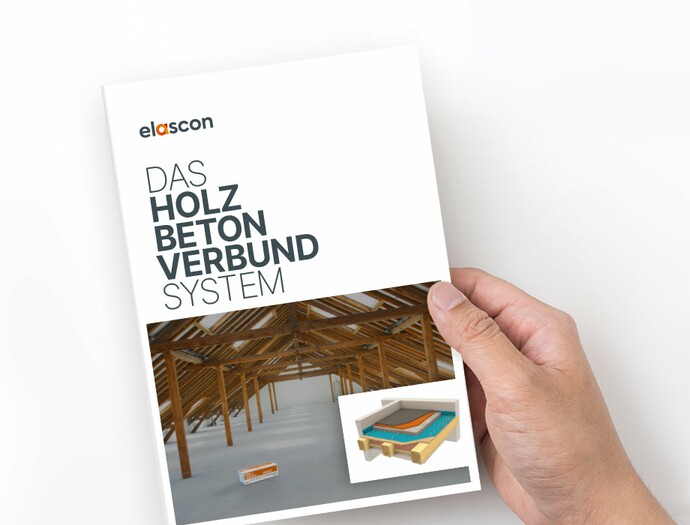 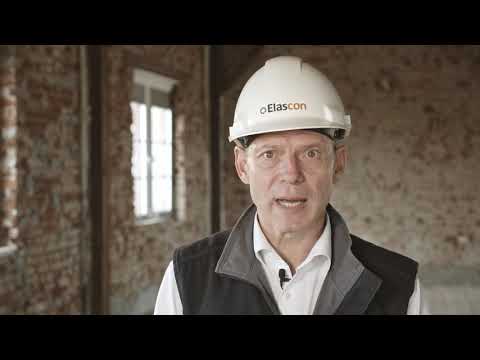 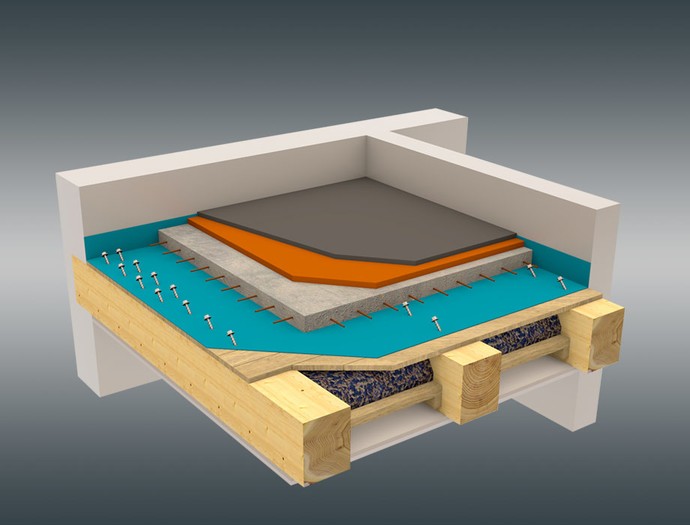 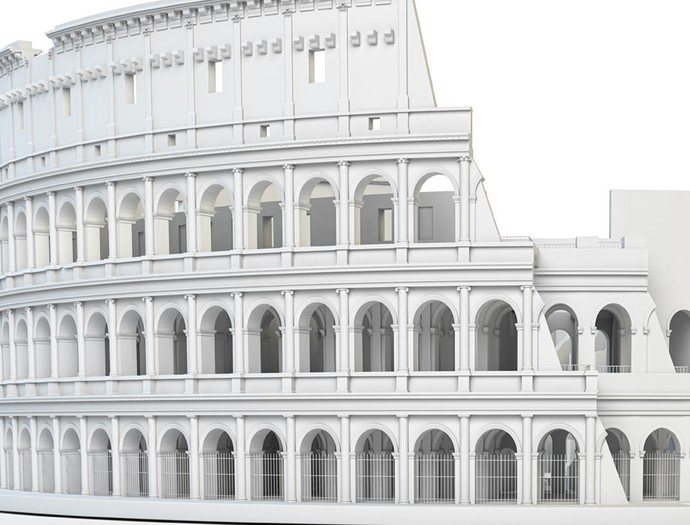 The Timber-Concrete Composite System - hereinafter TCC - is a method by means of which timber beams or other timber elements and cast-in-place concrete are interconnected through shear connectors to produce a planar element.

Even in Antiquity, timber and concrete were combined to produce composite components. However, the innovative features of a composite made up of these two constituents could not website be used until 1990ies when sophisticated shear connectors and sets of appropriate model calculations were finally developed. Today, the TCC system is used for the refurbishment of ceiling supporting structures, pre-fabrication of structural elements, and - in certain cases - in bridge building.

The key benefits of the TCC system of today: Use for Refurbishment

The Timber-Concrete Composite System (TCC) is most frequently used for the refurbishment of old timbered ceilings, when it is essential that modern requirements in terms of comfort (for example sound insulation) and safety (including fire resistance) must be met. Within the scope of the optional post compaction measures, the TCC system makes it possible to achieve the mandatory performance in terms of load bearing capacity and safety relatively economically. The TCC system has now also become established in the field of ancient monument preservation; the reason is that there are virtually no other economically viable alternatives for either the preservation of the old fabric or the view from below.

The TCC system produces significant improvements in terms of

Timber beamed ceilings constitute linear supporting elements. Hence the calculations of the static properties are based on individual, bar-shaped elements (as a rule beams). During the construction of a TCC-ceiling, the existing linear bending characteristics of the supporting system are transformed into those of a semi-solid surface structure, the constituent elements of which produce a combined supporting effect. The concrete takes up the compressive forces, the timber the tensile forces. When screwed-in shear connectors are used, old building ceilings with a span between 4 and 7 m may be rehabilitated to ensure a traffic load carrying capacity of approx. 5.0 kN/m2. Newly constructed ceilings with a beam pitch of approx. 3.5 and spans of up to ca. 9 m can be obtained with a traffic load carrying capacity of up to approx. 5,0 kN/m² max.

The positive properties of a TCC supporting structure are obtained by the creation of a composite structure of the two components, timber and concrete. Without bolting, the degree of concrete composition and timber is 0% (no composition). For a theoretical full-face »adhesive bond« (unachievable in practice) between timber and concrete, the degree of composition would be up to 100% (complete composition). The degree of composition depends on the number of rows and the distance between the so-called shear connectors in the direction of tightening. As a rule, with approved connectors, a composition level of some 40 to 50% is achieved, i.e.,there is a significant increase in the load carrying capacity of the TCC system. 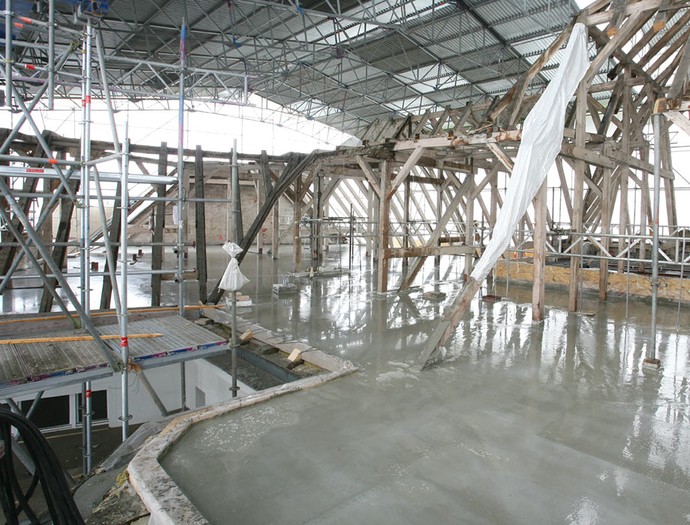 Refurbishment of a historic building on the Berlin Kurfürstendamm 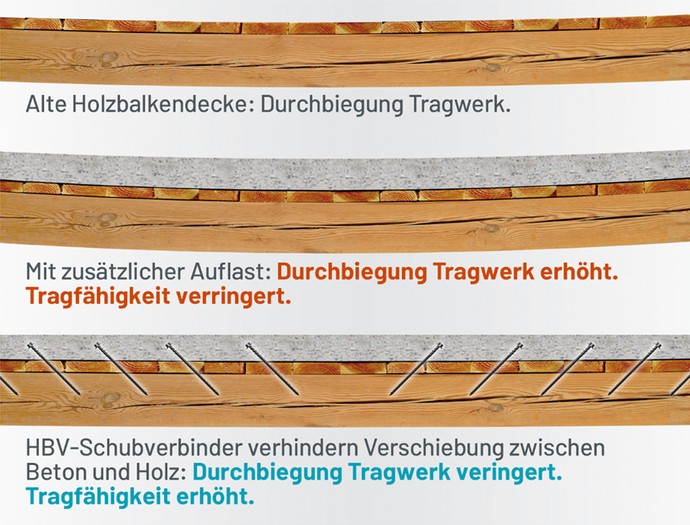 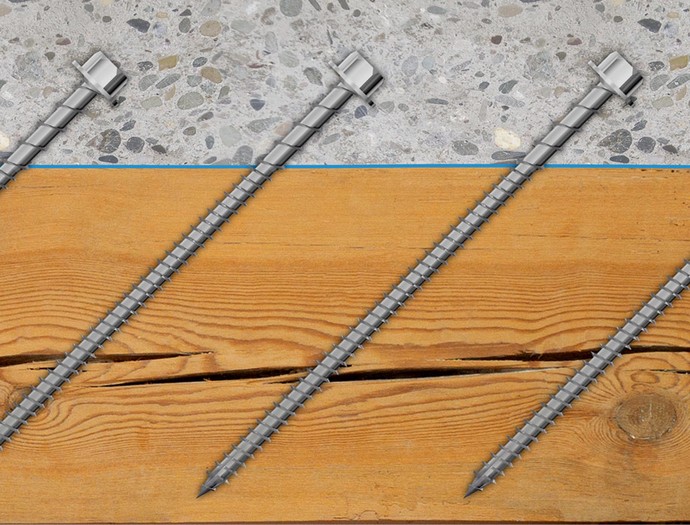 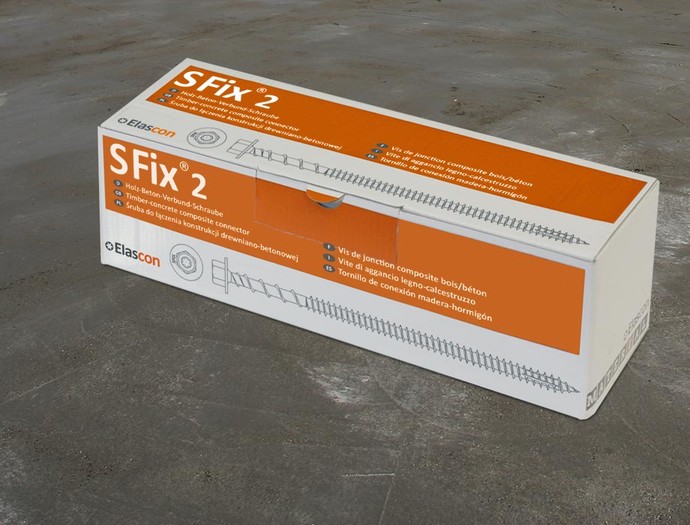 The »Shear Connectors« - the key element

Initially, full-thread were used in the timber-and-concrete construction work. Nowadays, several manufacturers offer special TCC screw connectors. The widespread use of screwed-in shear connectors is due to the fact that their dimensions can be precisely specified after r the initial sizing and their simple use on site. In cases in which prefabrication is employed (new buildings), other connecting means such as perforated metal sheets or pressed-in ties are used; however, these cannot be used for refurbishment purposes, or only under ideal circumstances. One relatively new shear connector is the so-called “hybrid-cam”, a steel tube filled with special cement mortar; this is used in particular together with cross-laminated timber. It is important for the planner that the connectors are fully approved by the construction supervisory authorities - otherwise a separate permission to use them needs to be applied for in every single case.

TCC-Ceilings are now being implemented in several variants. Several questions need to be answered before panning may commence. These are:

1. Concrete layer above the timber beams

Depending on the condition this version may be installed without prior dismantling. As the shear connectors are screwed into the supporting beams in an inclined position at an angle of 45°, this variant is the least demanding. Depending on the superstructure, the floor boards or new OSB shuttering must be provided, if additional sound insulation is installed between the supporting beams - any false ceiling - must be capable of supporting the weight of any freshly poured concrete for the duration of the construction work.  A design with a height that exceeds that of the beams significantly increases the height of the overall floor build.

2. Concrete layer between the timber beams

After removal of the floor boards, the compartments are prepared so as to accommodate the height of the fill and, where appropriate, any sound insulation, the shear connectors are screwed into the supporting beams in an inclined position at an angle of 45°. The false ceiling must be able to support the weight of the freshly poured concrete during the construction work.  The greater cost of installation of this variant is justified, if the floor structure must not be increased in height.